Boolcoomatta is a conservation reserve that has been managed by Bush Heritage Australia for 10 years, during which time the management plan has cycled through three major adaptations based on analysis of implementation and results. Highly commended in the Case Study competition, some experiences and learnings from multiple iterations of the Open Standards cycle are outlined here. Nine years of monitoring data covering 3 updates of the evolving plan inform this analysis, assess the effectiveness of the plan, and measuring impact.

Boolcoomatta is located in the arid rangelands of north-east South Australia. The area has been home to the Adnyamathanha aboriginal people (pronounced Adna-mut-na) for over 40,000 years. In the early 1800’s they were dispossessed when Europeans arrived and established large pastoral stations and mining activities. Boolcoomatta was established as a sheep station in 1845 and remained a productive operation until it was converted to a conservation reserve and acquired by Bush Heritage in 2006.

The 64,200 hectare (approx 160,000 acre) property is located in a poorly-protected bioregion and was rated by the government as the highest priority for reserve acquisition in South Australia. It is home to 6 threatened vegetation communities and at least 23 threatened species, including the Critically Endangered Plains Wanderer and at least 22 other endangered species.

Key results are summarized in the progress score cards. The viability of most key conservation targets has improved gradually, illustrating the slow pace of ecological change in semi-arid environments. These viability ratings are drawn from measures, indicators and key attributes in Miradi’s viability table. Most key threats have reduced although some (feral cats, and total grazing pressure) have increased and are the focus of renewed efforts in the latest iteration of the plan. 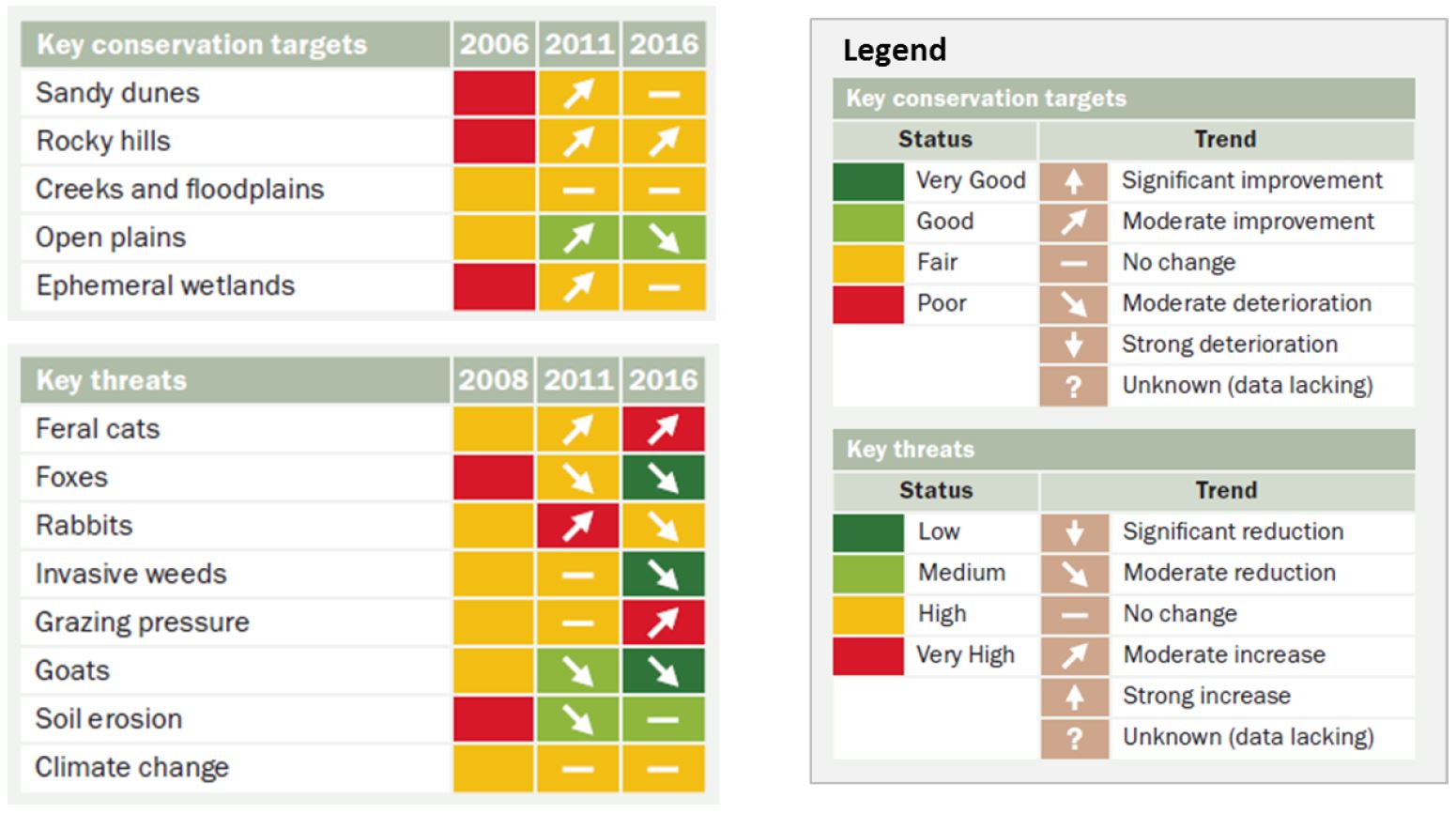 This decade-long project has provided many insights and lessons for managing long-running projects.

One key benefit of using the Open Standards is the common approach and common language that it provides. Similarly, using Miradi to manage information for all projects helps people to build competency and to take this with them as they move to other projects. While we are all still learning, having a standard approach means our people can more readily move from one project to another, and comparisons can be drawn between projects. Also, by capturing similar information across multiple sites we can scale up to organization-wide outcome reporting. This requires regular and ongoing support from people skilled in Open Standards and Miradi to the users; supporting project team members to “learning by do” has proven more effective than isolated training. The lessons learnt from Boolcoomatta can be and are applied to Bush Heritage’s other projects, and vice versa. There’s value in finding ways to share lessons amongst the broader conservation community.